The Value of Competitive Bidding in IT Procurement 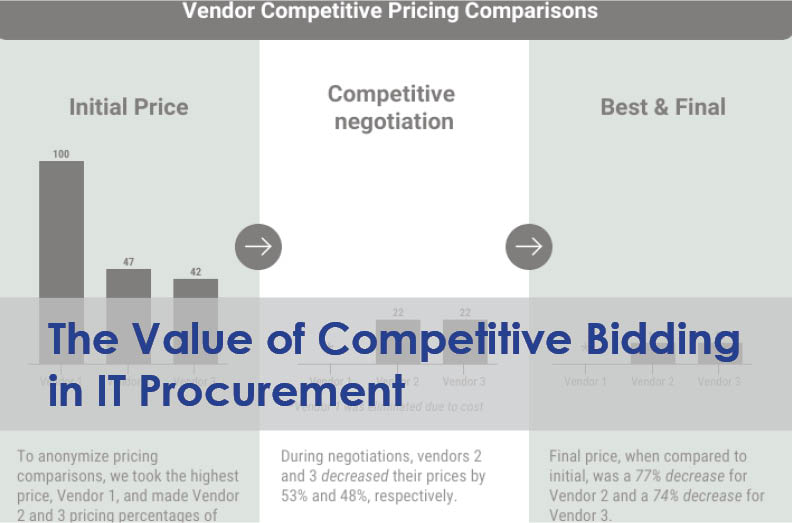 The Value of Competitive Bidding in IT Procurement

Competitive bidding on IT products and services often garners a broad range of pricing even from the same vendors let alone across the vendor space. Substantial dollar amounts can be saved through the competitive bid process versus buying at prenegotiated prices.

A university’s preferred IT vendor list sometimes streamlines the procurement process for both IT and the Procurement Office, but the pricing available through those channels does not always result in the best value for the institution. With nearly every CIO hampered by chronically insufficient budgets, competitive bidding offers a way to significantly increase buying power and get better contract terms.

How The Bidding Process Stretches Budgets and Brings Additional Benefits

Once an RFP or RFQ has been issued and vendors know they are actively competing against one another for the same specifications, pricing and terms can vary widely from the initial through final bids. Manufacturers hold huge sway in the discounts provided through the vendor channel and should be involved in the bidding process whenever possible.

The bidding process also enables the buyer to make better buying decisions. Items that are described in more detail in an RFQ allow vendors to be more specific in their responses, which enables the buyer to cut through any vendor marketing hype and realistically compare similar products and services among vendors. This process often also brings to light potential solutions that might not have been otherwise considered.

Another bright light of competitive bidding is that it doesn’t have to be a lengthy process. Vantage clients have benefited considerably from requesting mini-bids from vendors. A mini-bid request is a scaled-down RFP that focuses on a specific buyer challenge and, often, a specific solution concept. It enables vendors to more quickly provide pricing for a product or service, as well as ancillary products, licensing, and support. A mini-bid request is distinct from an RFQ for a specific bill of materials, which is typically a relatively simple path to competitively purchase specific makes/models of products. This process is also distinct from a formal RFP in that an institution may still leverage existing contract vehicles but at improved pricing because of the forced competition.

Tip: For technology that requires support, maintenance, licensing, and subscriptions for security services, as well as lifecycle replacement, make sure the RFQ calls out those items specifically for the full lifecycle term. It’s important that bids received can be evaluated for the same items. The combined costs of these items often exceed the cost of the technology itself. Similarly, for telephone systems, taxes and fees often greatly increase costs.

Vantage issued an RFQ on behalf of a higher ed institution in which we solicited mini-bids for firewalls. The breadth of potential players included several manufacturers pre-qualified by team knowledge to have a strong chance at providing an effective solution. In the RFQ, we described the client’s current security, network, and long-term plans in enough detail to help the respondents propose the most applicable products and services.

To make prices among vendors easier to compare, we asked the vendors to simplify or summarize their bill of materials, with enough break-out details to understand the major items. The pricing was to cover the firewall over a five-year period, as well as ancillary parts, software, subscriptions, licensing, support, and any replacements that would be necessary. In these types of procurements, we also typically ask for a sustained discount level over the lifecycle of the product.

Figure 1 offers a compelling look at the difference in pricing from the initial bid prices of the firewall packages compared to the drop in price when competition came into play during the mini-bid process, and further price drops when vendors were pressed for their best prices. If the client had accepted pricing from its existing state contract without a competitive bid, it would have paid about four to nine times more for the same products. 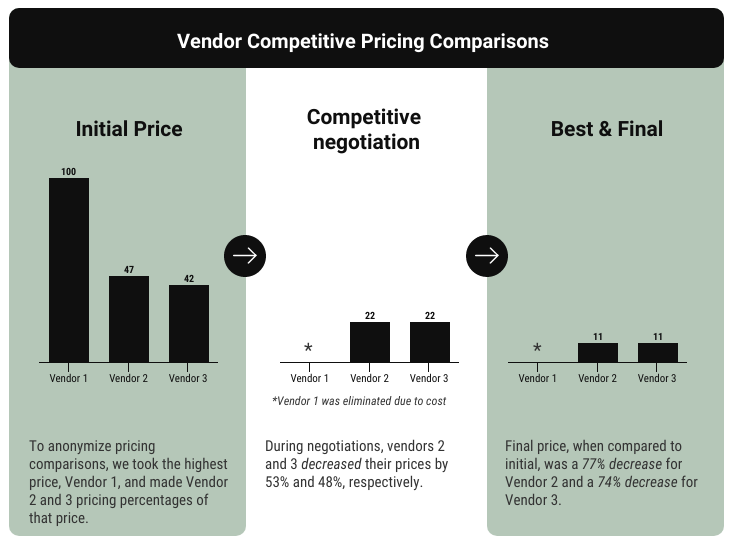 We merged multiple separate pricing efforts to create this pricing comparison without risk of exposing confidential information. We also recognize that the graph is oversimplified in that the dollar amounts do not reflect the full ROI calculation of firewall ownership.

There is also value in finding vendors that might not have otherwise been given serious consideration.  For example, we issued an RFQ for mini-bids for network switches on behalf of a client. In this case, the bid process did not result in a significant price drop from all vendors. However, manufacturers with innovative and well-priced solutions made the short list that would not likely have been considered had the RFQ not been issued. At least one of the low-cost outliers had a competitive product with a complete and strong feature-set worthy of serious consideration and with major cost savings.

The switch RFQ also drove home the importance of the replacement cycle as an evaluation point, particularly as the expected replacement period varies significantly between vendors. The next two charts illustrate that point, which use anonymized data to protect vendor confidentiality. Figure 2 shows the cost ranges for seven switch vendors. 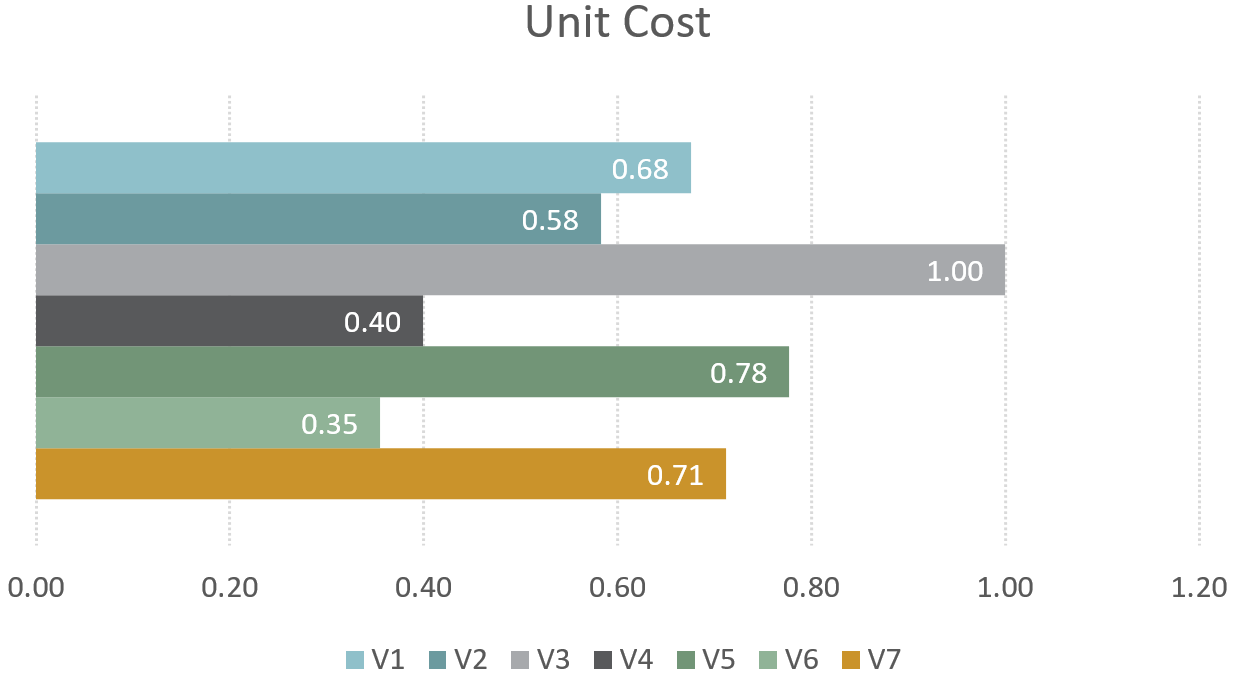 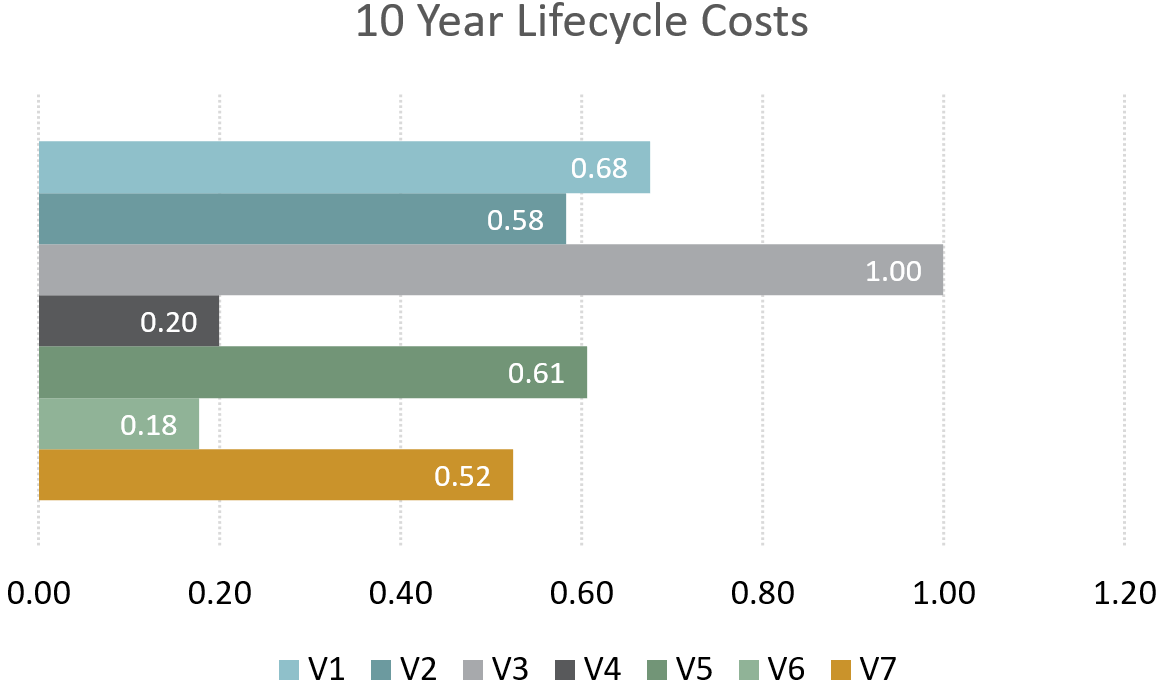 Comparing the charts, notice a cluster of prices at the top that are the same, an outlier (1.00) that is much more expensive, and a few prices in the middle (0.20 and 0.18) that are much less expensive than the rest. When functionality isn’t driving a clear winner, differentiation on price is one way to help separate a field of vendors and figure out one to focus on.

Both examples – firewalls and switches – are representative of many procurements. The descriptions are simplified to protect the privacy of the institutions and vendors and do not represent any single procurement, but rather an amalgam of many to protect confidentiality.

The Vantage Strategic Planning and Technology Management group can assist you and your organization with the competitive bidding process described in this blog. We also offer expert consulting in business continuity planning, disaster avoidance, and recovery planning, organizational development and transition planning, and financial modeling and assessments.

Learn more about The Vantage Vision for a Modernized Network.

The Vantage Vision for a Modernized Network