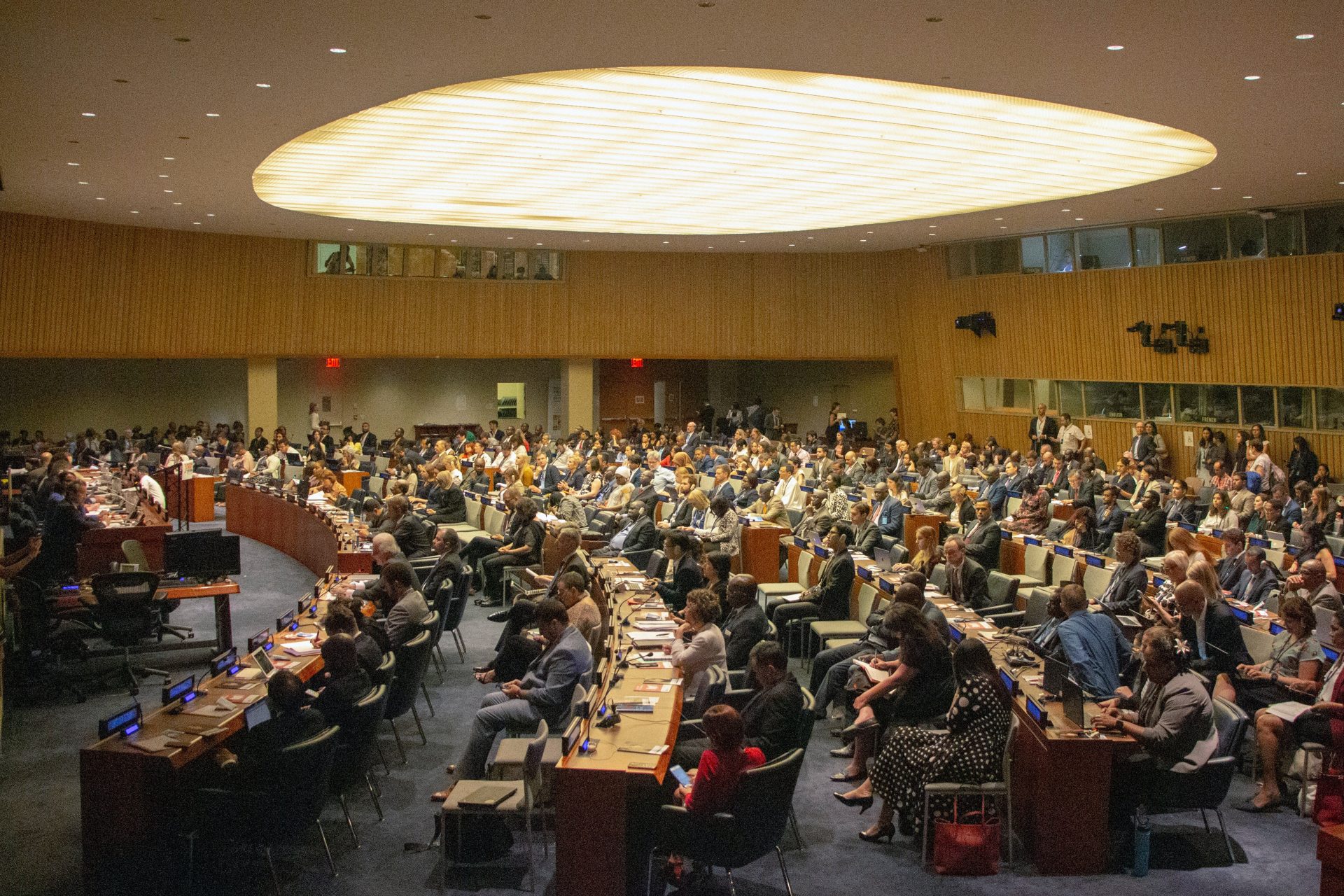 The iconic United Nations Headquarters (UNHQ) in New York was built between 1949 and 1950 near the East River and consists of 6 buildings totaling 2.6 million square feet spread over 17 acres. In 2008, the United Nations embarked on a multi-year, $2.15 Billion project to refurbish the UNHQ complex to replace deteriorated systems, to meet current building codes and standards for safety, security and accessibility for persons with disabilities and to improve its environmental performance.

Our project work at the United Nations included:

Vantage worked closely with all stakeholders to envision, design, and deploy technologies that are part of a master plan for the entire campus.

The Conference Building primarily supports the work of the UN’s ceremonial and deliberative bodies.  Reopened in 2013, the building includes innovative presentation, congressional/conference, simultaneous interpretation, and broadcast/recording systems integrated into each of the 3 ceremonial chambers, 3 large 250-seat conference rooms, and 2 medium 30+ seat conference rooms.
The Conference Building also houses the centralized “PBF” (including broadcast studios, media asset management/archival system, post-production suites, and a technology command/control center) which interconnects all systems across the campus and out into the world.

The General Assembly Building, most noted for the famous 2,000 seat Plenary Hall, was reopened after 2014.  The renovation included forward-thinking presentation technologies designed to integrate with and complement the historic mid-century architecture.

Vantage accomplished the UN’s goal to enhance energy efficiency, to rationalize workspace on each floor and to accommodate advanced technology. Facilities in the Secretariat include the Secretary General’s office and personal conference facilities, two floors of videoconference enabled meeting rooms, the UNOCC Crisis Briefing Center, the press briefing room and media production areas for UNDPI and facilities for the external media.  The project included a complete floor of audio production studios but the functions provided by an advanced media asset management system and the inclusion of multipurpose studios in the Conference Building rendered these facilities unnecessary and resulting in substantial savings for the project.

Vantage was employed to provide transition and cut-over strategies and plans for the multiple phases of construction and system replacement. Throughout this process Vantage worked in collaborative sessions with the project managers, the United Nation’s technical groups, the multiple architectural/engineering design teams and the specialist contractors and integrators to identify issues, seek resolution, and build consensus.

Vantage identified functions and services required to operate without interruption, established dependencies and constraints, and sequenced operations to establish the critical path and eliminate risk of outages. Throughout the duration of the projects, Vantage reviewed and updated strategies as project milestones were completed or revised and provided executive oversight and technical administration of the implementation throughout a demanding project timeline spanning over 7 years without any disruption.

This system architecture centralizes over 13 miles of copper and 19 miles of fiber-optic cabling from across the entire UN campus and consolidates all communication with an approximately 1700 x 1500 3G-HDSDI/MADI core routing plant.  Collaborations are possible between any locations on campus or across the world in a way that has never existed before the renovation.The new broadcast facility delivers an unprecedented level of automation and digital recording, including a Digital Media Asset Management system capable of ingesting, cataloging, searching, and automatically retrieving over 2750 Petabytes of digital content including video, audio, and related presentation files/documents, with over 60 hours of official proceedings content added daily. Over 160 channels of program content can be simultaneously distributed to commercial radio and TV stations, press, building signage, the web, and mobile devices.