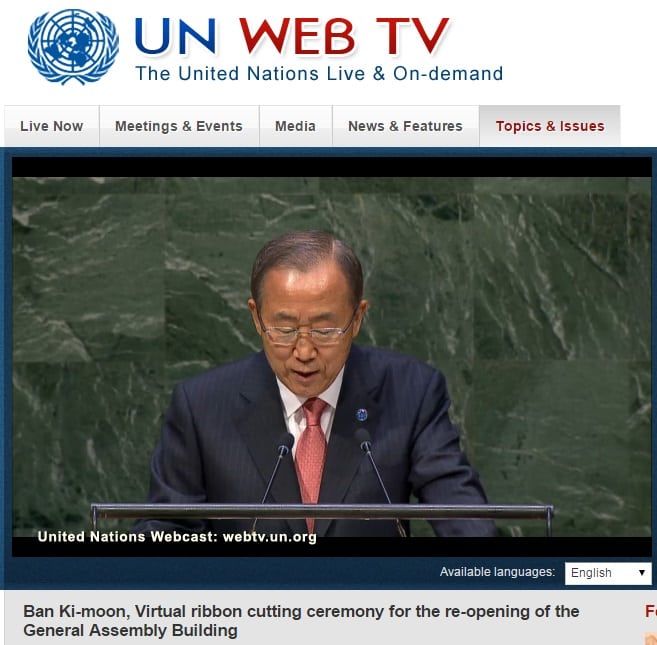 On September 15, 2014, on the eve of the United Nations 68th plenary session, UN Secretary Ban Ki-Moon took to the podium of the Great Plenary Hall and acknowledged Vantage Technology Consulting Group for efforts as part of the UN Capital Master Plan, a large decades-long multi-billion dollar renovation of the UN’s Headquarters campus.

That ceremony marked the opening moment of a new era for the UN: the official unveiling of its freshly renovated General Assembly building and the final ribbon cutting in a renovation of over 2.6 million square feet in the past 7 years.

“This project is the perfect showcase for Vantage’s ethics and expertise – it required all of our skills as strategists, tacticians, and technology designers.  We formed a strong bond with the UN, and I’m thrilled they are so happy.”

Originally built between 1949 and 1952, the UN headquarters in New York stands as an international landmark, with iconic architecture and a global mission.   However, forged in the golden era after World War 2, the buildings were growing outdated and could no longer keep pace with the modern tools of communication and collaboration necessary to support the UN’s mission of global diplomacy.

UN officials responded by crafting the “Capital Master Plan” (CMP); a comprehensive roadmap for the modernization of its 17-acre headquarters complex.  Approved by the General Assembly in 2007, the CMP addressed every operational deficiency while preserving the original aesthetic.  Vantage served as lead consultant to address the technical aspects of the CMP; tasked with providing a comprehensive design to facilitate renovation, replacement and implementation of myriad technological capabilities and systems throughout the building.

So while the buildings may still look very much like a classic of 1950’s architecture inside its halls, offices, and meeting spaces, to its core the United Nations is again setting the vision for the future.

The seven-year-long project was among the most challenging, inspiring and gratifying undertakings in Vantage’s history.

Watch Secretary Ban Ki-Moon acknowledge the hard work of the UN-CMP and its associates as he uses the building’s technology to virtually cut the ribbon and welcome world leaders to the opening of the fully renovated campus.

Vantage Seminar on Cybersecurity at AICUP 2015