Rebirth at the “Reggie”

Rebirth at the “Reggie”

Dashing to the Finish Line with New Video, Audio and Broadcast Infrastructure

One of the fastest tracks in the nation – the Reggie Lewis Track and Athletic Center – is on a fast track of its own, sprinting to maintain its position among the nation’s premiere sports venues. More of an endurance race than a hasty dash, the facility is positioning itself for long-term dominance through an extensive, multimillion-dollar renovation that features technology designed by Vantage Technology Consulting Group.

Fondly referred to as “The Reggie” by many of the world’s elite athletes and knowledgeable sports fans, the facility in Roxbury, MA hosts as many as 90 professional, collegiate and high school track meets annually, including the USA Track and Field (USATF) Championships, New Balance Indoor Grand Prix (formerly the Boston Indoor Games), Northeast 10 Championships, NCAA Division II Championships and the High School National Championships. 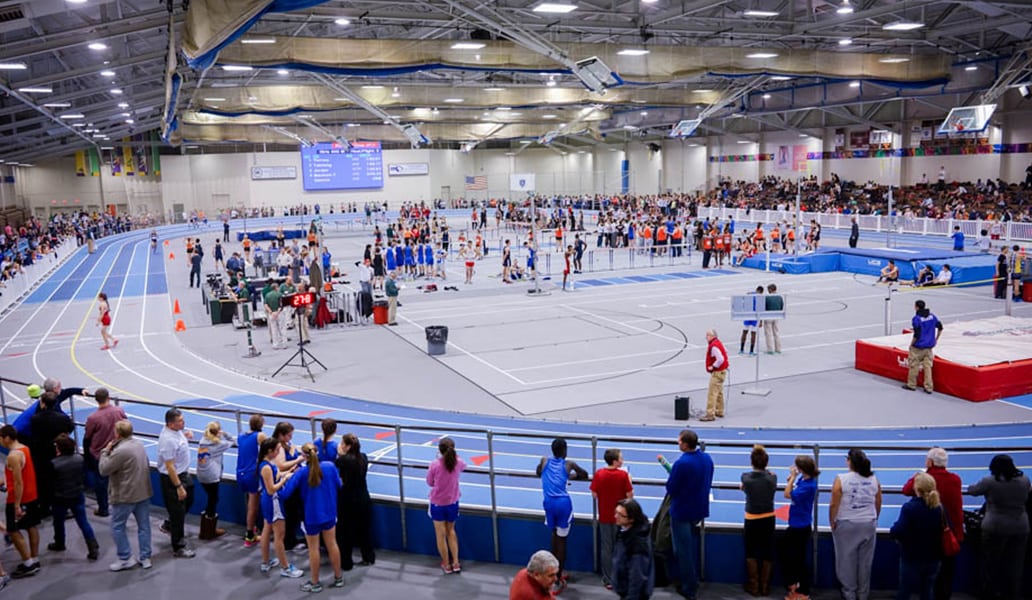 A total of 41 World, American and National athletic records have been set at The Reggie since it opened in 1995. But when the coveted USATF Championships moved to Albuquerque, NM in 2010 after seven years in Boston, and with the facility showing signs of age, decision makers in Roxbury commissioned a comprehensive review and $5.7 million renovation of The Reggie that is already turning heads and impressing major event organizers with the completion of the project’s first phase.

The heralded venue is celebrating its 20th year at the center of the track and field universe by unveiling Phase One of a two-part, facility-wide renovation featuring Vantage-designed technology upgrades that include a new high-definition video screen/scoreboard and state-of-the-art sound system.

“They wanted the first part of the project to unfold quickly and have a big impact, and that’s exactly how it worked out,” said Vantage Associate Principal Michael Pincus. “The most noticeable tech element of Phase One is the new, 15-by-28-foot high-definition LED display/scoreboard that is really quite impressive. Phase Two will include an equally impressive new sound system.”

Those improvements will certainly delight fans – the facility’s original 3,500-seat capacity has also been expanded to accommodate up to 5,000 spectators – and world-class runners are already welcoming the new Mondo Super X 720 prefabricated synthetic rubber running surface that is preferred by world-class runners and Olympic athletes. The Reggie had been using an outdated Mondo track that was installed when the facility first opened in 1995, along with a low-definition black-and-white video display that had certainly seen better days.

The improvements are already generating buzz among the cognoscenti. The USATF Championships returned to The Reggie February 27-March 1, and the recent New Balance Indoor Grand Prix event on February 7th saw two new World records, one American record and five meet records set during that event. But this positive response is just the tip of the technology iceberg, according to Pincus, who said the technology’s full capabilities and impact have yet to be fully revealed.

“Phase One laid the groundwork, but there is much more to come in Phase Two,” Pincus said. “The new video display is great, of course. It replaced a much smaller, low-resolution black-and-white screen that was more than 15 years old. But the first phase also included installation of the extensive cabling and infrastructure necessary to support an array of exciting features and capabilities that will certainly ensure that The Reggie maintains its position among the nation’s top sports venues.” 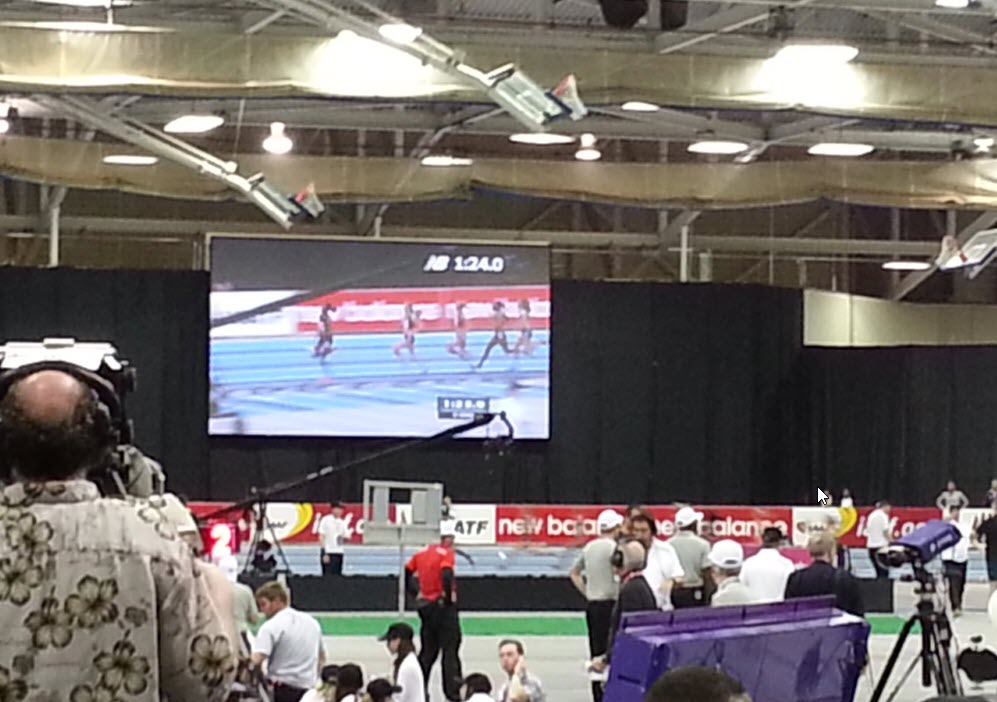 He’s talking about a new network of high definition digital cameras providing multiple feeds and camera angles. The Reggie incorporates two major spaces – the Fieldhouse where track events are held, and a gymnasium for basketball tournaments and other, smaller events.

“We designed conduit and cabling to support their data network and a bunch of new camera locations,” Pincus explained. “In Phase Two we’ll install 9 hi-definition robotic cameras at strategic points around the Fieldhouse and another four in the gym, along with a new video screen in the gym similar to the one in the Fieldhouse, though not quite as large.” 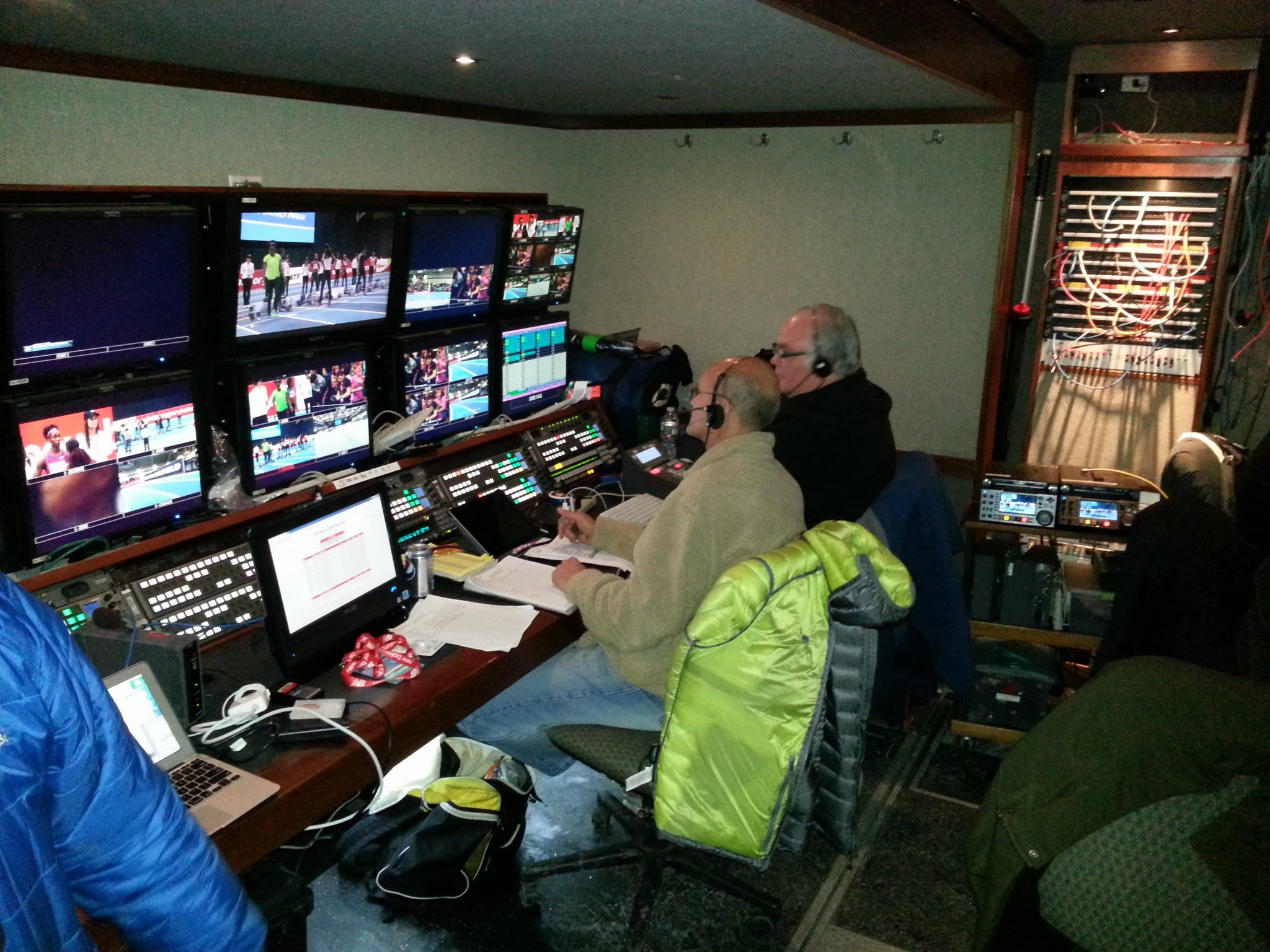 That new system of cameras and data streams will certainly delight spectators, who will be treated to an array of high-def images, multiple camera angles and state-of-the-art computer graphics. But the capabilities of the system Pincus designed are even more far-reaching than that, and promise to enhance the home viewing experience, as well.

“We’ve created digital pathways to accommodate outside broadcasters like ESPN and NBC Sports, who routinely roll up with big 18-wheel production trucks. For major sporting events, they bring in a full production studio on wheels, with instant replay, live production capabilities, directors, producers and other assorted technicians,” Pincus explained.

With the new cabling in place, broadcasters will be able to tap right into the fiber (video with embedded audio) and copper (multichannel audio) systems to capture live video and audio feeds, and do their mixing and transmitting directly from the truck, thus eliminating the need for portable cameras, unsightly scaffolding and thousands of feet of temporary cable.

“They can roll right up and plug into the fiber optic and data network cabling that ties all of the various cameras and audio feeds together,” Pincus said. “There is also a video production room in the Fieldhouse and fiber optics that run to the gymnasium as well. To be considered a world-class sports venue, The Reggie needed to have these capabilities in place.”

Of course, nothing compliments top quality visuals better than crisp, clear sound. And Pincus is looking forward to hearing the new system he designed. 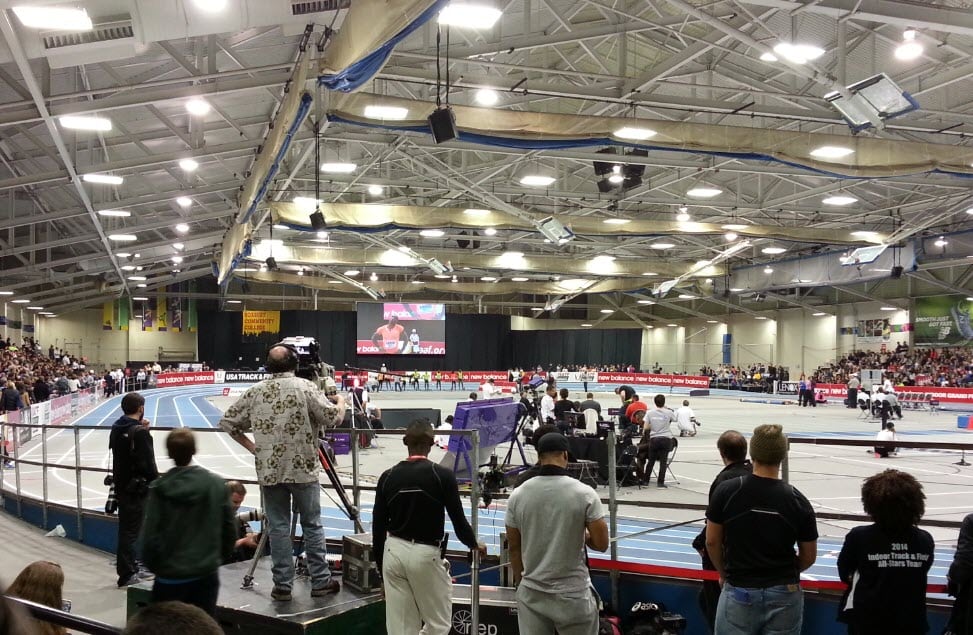 “The Reggie’s Fieldhouse encompasses a huge volume of space filled with many hard surfaces and exposed sheet metal,” Pincus explained. “They were using a centralized sound system with a massive speaker stack. You really have to pump up the volume to fill a space like that, and when you do, it causes quite a lot of reverberation that results in a loss of definition to the listener.”

The new loudspeaker system will feature smaller speakers distributed around the perimeter of the viewing area, mounted above the track facing the bleachers. Operating at lower volume but with greater clarity, troublesome reverberations will be diminished and the spectator experience will be greatly enhanced. The system will also include a new, smaller center cluster dedicated to the infield area.

“This is a very interesting and gratifying project,” Pincus said. “The Reggie is a worthy addition to Vantage’s history of designing state-of-the-art technology systems to support education, medicine and even sports venues. When Phase Two of The Reggie is complete, I might even run a victory lap!”

The Future of Medicine Taking Shape in San Francisco