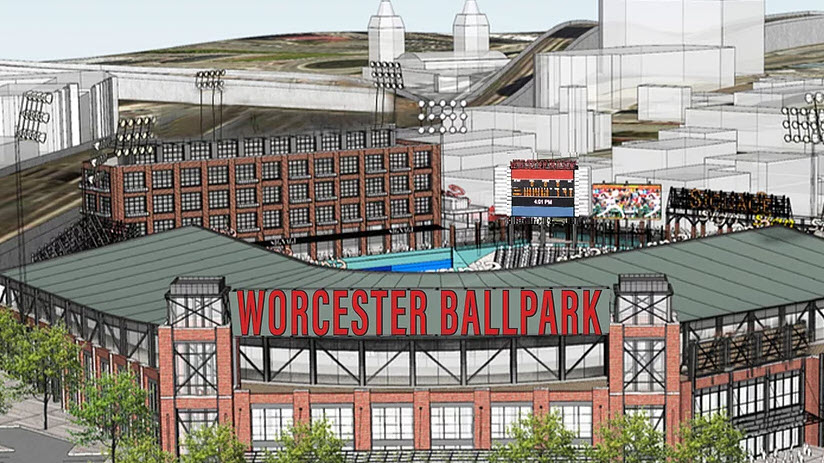 The Red Sox are coming to Worcester in 2021 – and they are going to be welcomed into a brand-new stadium that will provide an exciting technology-enhanced experience for their fans.

In August, 2018, the City of Worcester, MA, the Pawtucket Red Sox (the Triple-A baseball affiliate of the Boston Red Sox), Madison Downtown Holdings, LLC, and the Commonwealth of Massachusetts announced their agreement to partner on a large-scale redevelopment project in Worcester’s Canal District that includes the building of an innovative ballpark and the relocation of the Boston Red Sox Triple-A affiliate from Pawtucket, Rhode Island to Worcester. 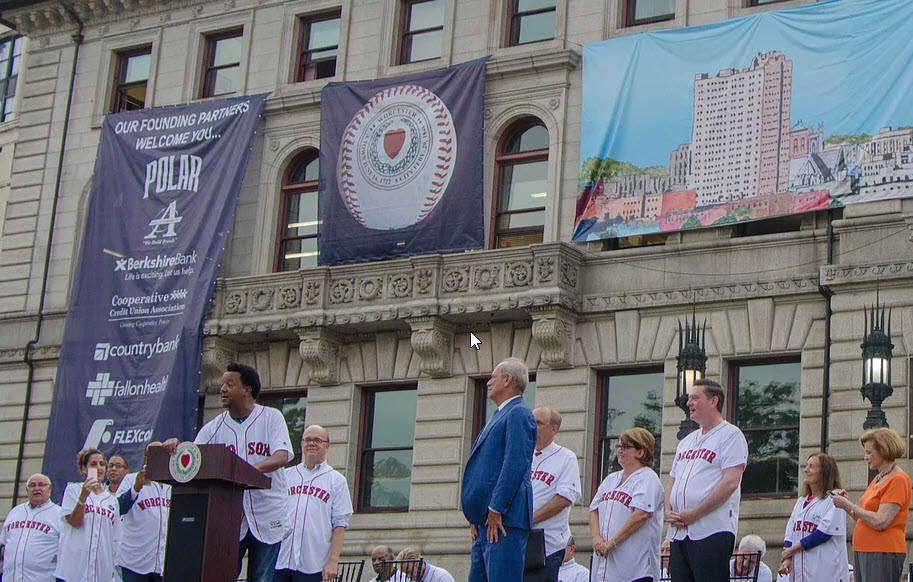 The Somerville, MA-based architect firm  D’Agostino Izzo Quirk Architects, Inc. (DAIQ) was selected by the Worcester Design Board in November to be the architect for the new stadium project. Previously, DAIQ worked on the renovation and expansion of Boston’s Fenway Park. In an article on Masslive, DAIQ president Thomas Quirk told the Designer Selection Board that his firm wants to incorporate Worcester’s background in the steel industry and innovations in technology into the ballpark.

The Worcester Redevelopment Authority announced the addition of Sasaki Architects to the team in January to assist in interpreting the original master plan for the entire Canal District and strengthen the connections between the Stadium and other developments in the area.

Vantage is excited to be on the DAIQ design team and we have already started work on the preliminary technology details for the stadium.

The design and construction of the ballpark will be overseen by Pawtucket Red Sox chairman and co-owner Larry Lucchino and Janet Marie Smith, senior vice president of planning and development for the Los Angeles Dodgers, who have previously partnered to create Oriole Park at Camden Yards in 1992 in Baltimore. The pair also collaborated and oversaw a decade of improvements to Fenway Park, starting in 2002.

What Are the Details of the New Polar Ballpark?

Polar Beverages, a family-owned and operated business in Worcester since 1882, acquired the naming rights for the stadium which will be called Polar Park. Construction is slated to begin in July 2019 and the ballpark is anticipated to open for the start of the 2021 Minor League Baseball season.

The ballpark will be owned by the City of Worcester and is expected to accommodate approximately 10,000 patrons. The new facility will also include meeting rooms, restaurants, a pedestrian promenade, retail locations, suites, party rooms and family-friendly activities. It is anticipated that the facility will host at least 125 events per year including 68 baseball games, large scale events and concerts, road races, collegiate and high school sporting events, fireworks and other community events.

Phase 1 of the construction will include a 150-room hotel, a boutique-hotel overlooking the stadium, 225 apartments and 65,000 sf of retail and restaurants. Phase 2 of the project will include an additional 200,000 sf of residential, office and mixed-use development. Since the ballpark will house the Boston Red Sox Triple-A affiliate, the field dimensions will mirror those of Fenway, Park in Boston to aid in player development.

Gathering input from the community is a major component of the design process. In order to make it easy for the community to provide input, members of the design team including Michael Pincus from Vantage have already started holding Fan Plan Meeting and will continue to hold additional meetings over the next several months. Fans are also encouraged to sign up for a meeting and can also submit their ballpark ideas on the Fan Plan page on the Polar Park website. 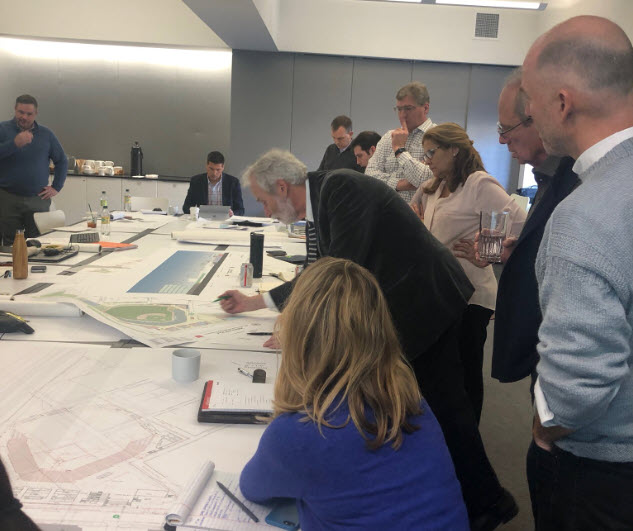 How is Vantage Contributing to the Ballpark Project?

The vision for the ballpark is to create a state-of-the art, technologically sophisticated, and entertaining ballpark.

“We want a ballpark that’s innovative in a variety of different ways, food service, seating, types of technology. So we have high aspirations for this facility.” 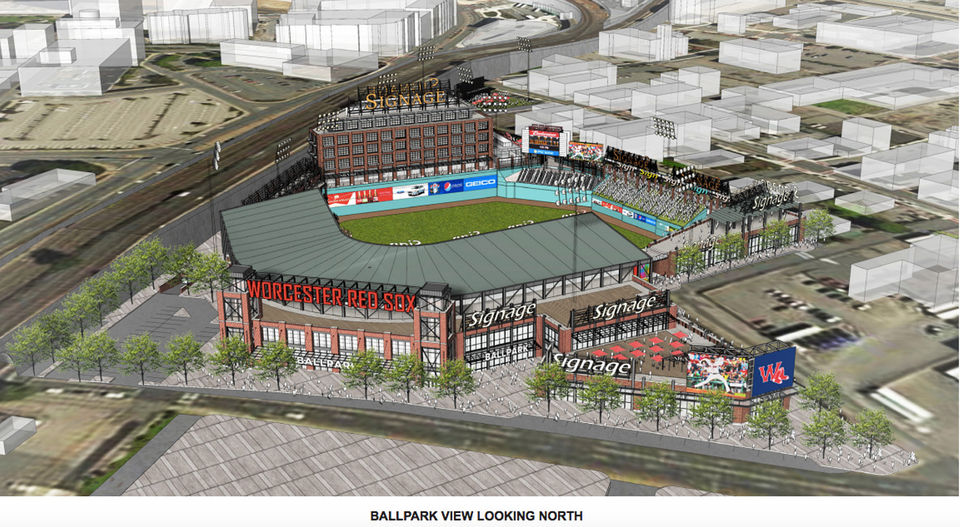 For the first phase of the stadium project, Vantage will be focusing on six main areas:

Visioning – We will listen carefully, think big, and then advise the owner and the architect about how to achieve the project goals of reinventing the fan experience and boosting fan engagement before, during and after games. We’ll do this by applying design thinking to go beyond the walls of the ballpark and envision the stadium as a bridge to the community.

Design of Robust, High-Bandwidth Technology Infrastructure – Working with the telecommunications consultant, we will create a technology platform that will support traditional live events such as concerts, digital events like e-sport competitions, and interactive entertainment and services.

Design of Systems to Support Location-Based Services – Wayfinding, seat locating, order-by-phone and concession line updates are just a few examples of services that will be enabled through geo-mapping, indoor GPS and beacon sensors.

Digital Media Application and Content Development – We will oversee the development of Digital Media and applications and will work third-party content developers to produce interactive digital media.

Design of Digital Signage Systems – We will design digital signage systems that will allow local retailers to communicate with customers and interface with fans through interactive applications.

The project is currently in the earliest phases of design, often referred to as “Concept Design”, where ideas are sparked and refined into a practical plan for a building. Beyond the ballpark, Vantage will be contributing to an experience that extends into Kelly Square and the Canal District with smart-city revitalizations and technologies that will connect residents and visitors to local events and businesses.

Philip Clendaniel, Parke Rhoads and Michael Pincus from the Vantage Boston office will be contributing to the first phase of the project. Stay tuned for future updates from the Vantage team as they point toward the opening of the stadium in April 2021.

5 Reasons Why AV Over IP Makes Sense for Higher Education