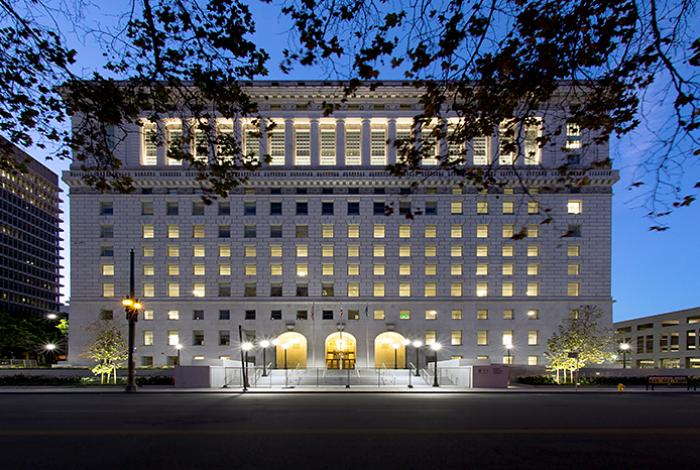 Vantage Technology Consulting Group, as part of the Nadel Architects team is providing peer review and technology oversight for the Hall of Justice Repair and Reuse Project. The Hall of Justice project is the renovation and upgrade of an existing County of Los Angeles building located in downtown Los Angeles. This is a design-build project which is 335,000 square-feet and will feature 308,000 square feet of office space equipped with entirely new mechanical, electrical and plumbing systems that tie back into the existing central plant. The Los Angeles County Sheriff and the District Attorney will be the new tenants occupying the building upon its completion in 2014.

The Hall of Justice was originally built in 1925. The historic renovations are integral to the success of this project for the tenants as well as the residents of Los Angeles County. Historic renovations will include extensive cleaning of the exterior granite and restoration of the marble-clad grand lobby and loggia. The original elevator cabs will be refurbished and installed into the new elevators. In addition, the historic staircases along with one of the courtrooms and law libraries will be preserved and restored to their former condition. The jail cells, which used to reside on the upper floors, have been removed in order to accommodate a functioning office space. One of those jail cells, believed to have housed Charles Manson, will be on display in the Hall of Justice’s new Interpretive Center located on the first floor.

Other enhancements to the Hall of Justice include a modern cafeteria space, a new 1000 car parking garage and new landscaping features. The project team will be pursuing a LEED Gold Certification.